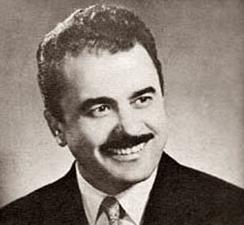 Folk songwriter and organist of the first post-war generation. He wrote and performed over 150 songs.

Tolis Harmas was born in 1918 in Leonidio, Kinouria, Greece as Apostolos Harmandas. Son of a lute player, he spent his childhood at his birthplace and in 1936 he moved to Piraeus. There he met Giorgos Mouzakis and decided to become a musician. He learned guitar and baglama and during the Occupation he played in taverns for a plate of food.

He became a professional musician in 1948, when he met the woman of his life, Litsa Zerva (1917-1978) from Thebes. Together they created the famous «Ntouo Harma» that made history at the folk singing scene of the 50s, with great hits on its resume.

In 1967 he immigrated in the United States where he collaborated with Manos Chatzidakis for the music of the movies "Land of Dreams" and "Never on Sunday". He even got to Cannes with the song "Piraeus Children" by playing guitar in Lavranos' orchestra.

He stayed in the United States for 14 years, performing in cosmic clubs of the homogeneity. In 1981 he returned in Greece and until his life's finale in 22 May 2008, he remained musically active, with performances in traditional taverns.