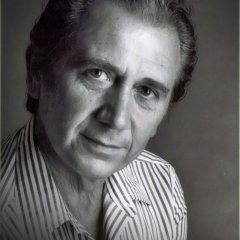 Apostolos Kaldaras evolved into one of the most notable composers and lyricists of rebetiko song.

Born in Trikala in 1922 and passed away in 1990! His early musical influences were refugee songs of his neighborhood mostly by his mother who was also a refugee

Being a good student at school his parents saw him to be a scientist. He studied at the Agricultural School of Thessaloniki, but soon abandoned his studies! Then he wrote his first song "Magkas vgike gia sergiani", which even today is as alive.

From that day he devoted himself to composition. He wrote over 1,200 songs that not only are sung still but also have the same old success

He is the only classical composer who wrote “rebetiko” and “laiko” songs, making hits there as well. Among the songs they are "Oneiro apatilo", "Gie mou", "Ena asteri peftei" etc.

He wrote two full projects on "Asia Minor" in verses of Pythagoras, and the "Byzantine Vespers" with lyrics by Lefteris Papadopoulos. His last Long Play disc was released in 1990, entitled "Ballades tou perithoriou"

A. Kaldaras cooperated with the biggest songwriters like Bob Virvos, Chara Papagiannopoulou, Pythagoras and others The Lyrics he wrote himself His Songs were performed by many great performers such as Panos Gavalas Gregory Bithikotsis Manolis Angelopoulos, George Dalaras, Haris Alexiou, Vicky Moscholiou Stamatis Kokotas etc.

He closed his eyes on April 8, 1990 in the arms of his wife, Loula, and only son, Kostas, who is also a composer He died at his home as he wished.

Lately, when he had realized that the end was approaching, he asked repeatedly to die in his house which he took care of and loved, and not in some cold hospital.